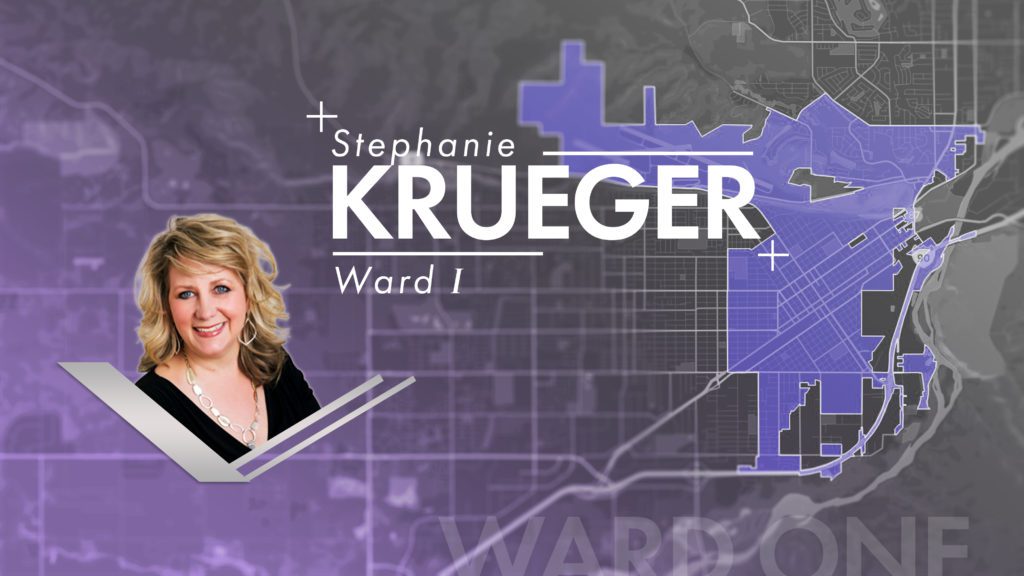 What is your 'why' behind running for office?

As a native Montanan, retired major in the Montana National Guards, and a current local business owner of a real estate brokerage, I have an invested interest to ensure that Billings maintains a healthy business climate, sustainable infrastructure and safe neighborhoods for our entire community. I am a mother of two great kids; one is an active-duty Marine and the other is an honor student in School District II. I have been married to a wonderful man for 20 years who is a builder, contractor and an entrepreneur.  Most of my extended family lives in the Billings area, and I have many great friends and business associates in Billings, so my “Why” for running for city council includes all of these individuals and reasons.

What are your three most important policy priorities? What do you hope will be the impact of implementing these policies?

The top three priorities to focus on for city council are supporting policies that promote the following: a strong local business climate that is able to create jobs for our citizens without overbearing governmental restrictions; a safe community that supports its police, firefighters, first responders and teachers and allows them to do their jobs; and a conscientious city council that knows how to manage a budget and minimize the tax burden on its citizens.

How should Billings, as the largest urban center in the state, be proactive about planning to ensure we are ready for continued population growth?

First, we need to look at the updated growth policy reports from our city administrator to know what the current growth rate is in the Billings area. In the past, Billings grew at a rate of 1 to 2 percent each year. The last two years have been anomalies with people from all over our nation relocating with hopes of finding a safer and freer place to live.  Once we have determined what the true growth rate is for Billings, we can work with Builders and Developers to provide additional housing to meet our residents’ needs.

Every day, I help my real estate clients find new housing. Across the spectrum, Billings has limited housing available.  So, no matter what the builders in our community decide to build, the result will be sellers selling their current homes to move into the new homes which will open up inventory across the board.  The Billings City Council, Yellowstone County, builders, contractors, developers and local businesses must all work together to create a Billings that will be sustainable and stand the test of time. The city council should continue to work towards common sense infrastructure, infill development if needed and thoughtful annexation to the city as well as supporting local businesses by not imposing more regulations.

Do you support the 2021 public safety mill levy? If so, how will you measure its success? If not, how would you address Billings’ public safety concerns?

I have always supported our Police, Firefighters and First Responders. It is critical that the City Council and our Public Safety Providers maintain a transparent relationship and are able to share with each other their realistic needs and budget. It is imperative to be able to openly communicate and trust each other. If our Public Safety Providers say they need additional funds to be successful in their missions, we, the public, should strongly consider supporting this current mill levy.

How important is it for City Council to prioritize catalytic developments, use existing tools such as TIF, find new economic development tools, and attract more private investment to Billings?

As Billings continues to grow, it will become more apparent to both the private and public sector as to what the new needs and desires are for our city. Creating think tanks of individuals in both private and public sectors, like the recent Housing Strategy Forum put on by Thomas Llewellyn or the Yellowstone County Metrapark Luncheon that shared ideas about the Metrapark’s future uses are two positive examples of Billings and county residents working together to start the process of sharing ideas and learning about the true needs of our surrounding Community. It will take a whole community of individuals to spearhead a project like a new convention center and as long as we are conscientious of budgets, how large developments like this will pay for themselves and ensuring that a project like this does not go bankrupt like the Allentown, PA project did, something like a One Big Sky Development could be a nice addition to our city. Yet, we must first focus on safe streets; once Billings has a handle on the vandalism, vagrancy, crime, intoxication and absentee property owners, our community will be more receptive to projects like the One Big Sky Development.

Do you support asking the State Legislature for a local option authority?

When managing a large budget like the City of Billings budget, it is imperative to not move budgeted money out of the General Fund if the city does not have the funds to pay for essential services. How to raise revenue without burdening property owners is a tough question to find an answer for. A local option tax may be a good solution, but Montana has never been a proponent for any kind of sales tax, so how does the city curb spending without affecting infrastructure needs?  We will need to work with our state legislators to develop these tools and explore different ideas for lowering our taxes but still providing the necessary services for our community.

What should City Council’s strategy be to fund Parks, an essential amenity for talent attraction, in the next several years?

First, the Parks department is struggling with taking care of the city parks they currently have, so at the current status, adding more parks will only exacerbate the problems of maintaining the parks. Secondly, many developers of these new subdivisions are not even breaking even financially with the requirement from city zoning that they must put in new neighborhood parks and green space with each development. A dedicated Park Levy could be part of the answer to this issue; yet we may want to also look at tax break incentives to developers when they create these green spaces; or we may want to consider not dictating what goes into these green spaces and let the neighborhoods decide. Perhaps the neighborhoods would like to have community gardens where the interested neighbors of this garden concept would create and maintain the space and reap the rewards of their efforts. We all may have to think outside of the box and be creative on ways to maintain our parks and make Billings more attractive.

Billings is currently experiencing a significant housing shortage, making it difficult for businesses to recruit new skilled workforce. What should City Council do to address this problem?

From my observation of the city council meetings, the current city council has been thoughtfully annexing new developments into the city. They have also been working on different by-pass corridors and belt loops to connect the city of Billings areas and allow for easier movement around the city.

The Project Re-Code, that city council passed, was met with both optimism and pessimism by the public. Many residential builders and developers I have spoken with believe Project Re-Code will actually increase their building costs with the increase of restrictions and the huge fees they must pay to build. Building permits actually went up 33% with the introduction of Project Re-Code.  The ultimate aim of project Re-Code was densification of neighborhoods and people.  The result was increased regulations and more builders looking for county land to build on. (Commercial property owners were also negatively affected by Project Re-Code.)  I know the City Zoning Department is currently working on many of these issues and I guess time will tell as to whether Project Re-Code was a good idea or not.

In the future, perhaps we can work with the legislature to create tax relief for manufacturing and big businesses to move into our community or tax relief for small businesses who are willing to take on new employees and train them.

We must never allow government entities to create regulations that strangle our businesses. The building industry has struggled with these regulations in the last two years due to the fact that building costs skyrocketed out of control, and they also could not find qualified workers. The result has been more expensive housing and less availability. (Supply and Demand)

The Housing Shortage is not just in Billings, Montana, it is a nationwide phenomenon.  We, the people, will all need to work together and allow free enterprise to create and thrive.  We cannot allow diabolical forces to destroy our free enterprise or our country.  The choice will be ours in the future.