Budget Battle: How the 2020 Billings City Budget Shook Out

As the old saying goes, “Show me your checkbook and I’ll tell you your values.” This year the Mayor and Billings City Council had to make difficult decisions facing revenue shortfalls. What would be cut and by how much? Are the improvements and investments that were planned for this year still possible? How much should be drawn from reserves? Should taxes or fees be increased? In the end, no single member of City Council got everything they wanted in the Fiscal Year 2021 Budget; after weeks of deliberation, when the final budget came up for discussion several amendments were proposed, but none managed to gain majority support. The final document contains no dramatic, sweeping changes to the City’s finances, but reflects a number of small changes to get Billings through this difficult time. 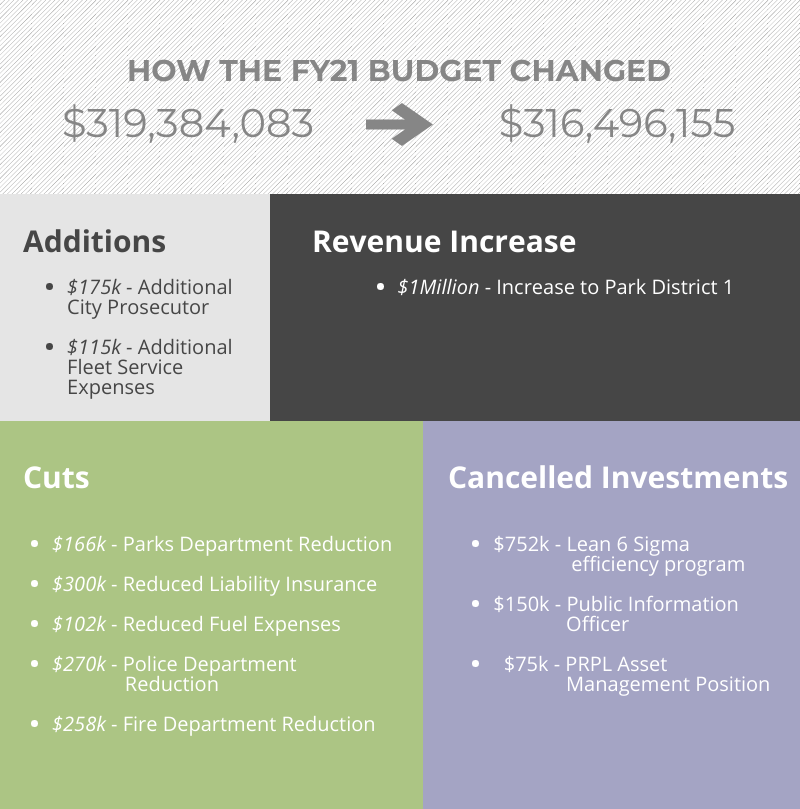 The City of Billings is funded primarily by property taxes. The Montana Department of Revenue determines the value of all properties in Montana, then the City may levy a certain number of mills. A mill is equal to 1/1000 of the value of the property, so how much each Billings resident pays in property taxes depends upon how much their property is worth according to the State of Montana. The impact of Covid-19 on property values in Montana is not yet known and is difficult to predict. Normally, the City would estimate an increase in the taxable value of properties in Billings, but this year they estimated no increase, leaving the expected value of each mill flat, while debt obligations stay the same and the cost of goods and services continue to rise. Similarly, the City of Billings often enjoys the benefits of population growth in the short term; as more properties are constructed, the tax burden is divided among more and more people, but in the long term that growth also creates an increased demand on services. The city has been feeling the weight of those long-term costs for the past few years and with construction disrupted by the pandemic, that discomfort is now much more severe. 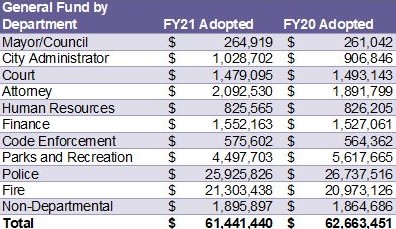 Mayor Cole and City Council were unsatisfied with the City’s finances before all of our lives were disrupted by disease; the pandemic didn’t just create new problems, it also amplified old ones. Over the past two fiscal years the City has used $9.6 million dollars in reserves, only $2 million of which went toward capital improvements – the rest were used to cover budget deficits created mostly by the hiring of police officers and firefighters in FY17 and FY18. Granted, some Billings residents did in fact advocate spending down reserves, but many (probably more) would have preferred to invest that money in the city since using reserves to pay for personnel is inherently unsustainable. Even before Covid-19, City Council was looking for solutions to this problem; they could cut police and fire, change the funding mechanism for parks, ask the voters to approve a mill levy for Public Safety, or some combination of the three. Council had been hoping to rely on a substantial Public Safety mill levy, but due to coronavirus, they settled on “some combination of the three.”

The City Administrator’s original proposed budget was nevertheless a valiant attempt to solve problems and accomplish the Mayor and Council’s priorities while keeping Billings in the black. The first proposal of the FY21 budget included 9 new staff members, a program to increase the efficiency of the City without diving deeper into reserves; however, this would have been accomplished by moving Parks funding entirely out of the General Fund and into Park District 1 (more on that below, but suffice to say that that would have amounted to a tax increase). While some members of City Council supported that plan, a majority did not, so over the course of several weeks, they made some substantial changes to the proposed budget.

While the overall budget was cut, the changes entailed more than just cuts. City Council added one additional prosecutor. Billings prosecutors are tremendously overworked – with far too many cases per prosecutor for each case to get the attention it deserves. The addition of one new prosecutor will not quite bring the number of cases per prosecutor in line with national standards, but it will make a significant difference. The $175,000 City Council has approved will cover the prosecutor’s salary, benefits, office space, and necessary resources.

Additionally, the City-appropriated $115,000 for added fleet service expenses is a necessary consequence of an increased number of City vehicles that must be maintained. (The chart below highlights a few changes)

Park District 1 (often referred to as PD1) is a Special Revenue fund, which means it has its own special source of funding – separate from the levied property tax mills that fund the general fund. The Billings City Charter has a cap on the number of mills that may be levied for the general fund, but the revenue for PD1 does not count toward that cap. Moving the funding for Parks to PD1 allows City Council to raise a corresponding amount of additional revenue by increasing the Parks District Assessment, which is a separate line on a property owner’s tax bill. The City Administration’s original proposal was to move Parks funding from the General Fund to Park District 1, which would have been nearly $6 million. City Council was unwilling to raise the parks assessment by that much and opted to make more cuts and use more reserves instead; however, they did shift $1 million of Parks funding from the General Fund to PD1, leaving $4,739,732 of Parks in the General Fund.

As businesses and individuals are tightening their belts, the City of Billings sought to save money in 2021 as well. TheParks Department budget was reduced by $166,000 and this year the Parks department will scale back their operations and staff, although swimming pools will remain open. The City will spend approximately $102,000 less on fuel this year, partially because fuel prices have dropped and partially because they will drive less. A much larger proportion of the $1.7 million in cuts, however, will impact public safety. Billings will reduce staff in the Police Department by 4 people through vacancy savings, which means that as people leave the department the City will refrain from hiring replacements. The Fire department will reduce its fuel consumption as well, defer maintenance, and cut overtime hours.

Before Covid-19 the City had been planning to make several investments in Billings. The original budget proposed by the City Administrator planned to keep many of those in place, but most were cut out by City Council. City Council elected not to move forward with Lean 6 Sigma, a program by which the City would hire a trained consultant and three additional staff to evaluate city operations to find cost and time efficiencies with the goal of ensuring taxpayer dollars are being used as efficiently as possible.

The City had also been planning on hiring a Public Information Officer, who would have been in charge of making information from city government more readily available. Finally, they had also planned to hire an Asset Manager for the Parks Department, who would have helped that department run more efficiently. All of this new hiring has been postponed for this fiscal year.

After a lot of hard work, the City passed a budget that will keep the ship steady as it continues to navigate the Covid waters. The City will use almost $4.7 million of reserves to balance the budget, but there will still be some reserves left over next year. The pie chart below shows the different funds within the Budget. Public Safety ($47,229,264) funds Police and Fire. Special Revenue Funds ($62,999,171) are funds which have their own funding mechanisms; some are assessments like Park District 1, while others are grants and still others are non-property taxes like the gas tax. Debt Service Funds ($4,758,842) are payments the City is making on General Obligation bonds; this year the City actually payed off a bond taken out in 2000 for Parks, so voters will see the number of mills levied go down on this year’s property tax bill. Internal Services are expenses related to maintaining City assets, paying for insurance, and spending on other necessities related to the functioning of City Government.  Finally, Enterprise Funds ($122,317,676) are water, wastewater, parking, solid waste, airport, and transit, which are all funded by user fees, not tax dollars.

The General Fund was set at $42,381,125 and pays for the Mayor and City Council, City Administration, Human Resources, City Attorney, Court, Finance, Code Enforcement and Helps pay for Parks.

The FY21 budget may not be anyone’s idea of a perfect budget, but very few budgets produced by a democratic body meet that standard. The pandemic made already difficult decisions even more difficult and each member of City Council had to compromise to reach this final product. Billings will survive this difficult fiscal situation because of the strength of our business community. We weathered the Great Recession a decade ago and we’re eventually going to emerge from this Covid crisis. While there is a long way to go, we can rest assured that our business community is finding solutions, adapting, and providing an example for others to follow. 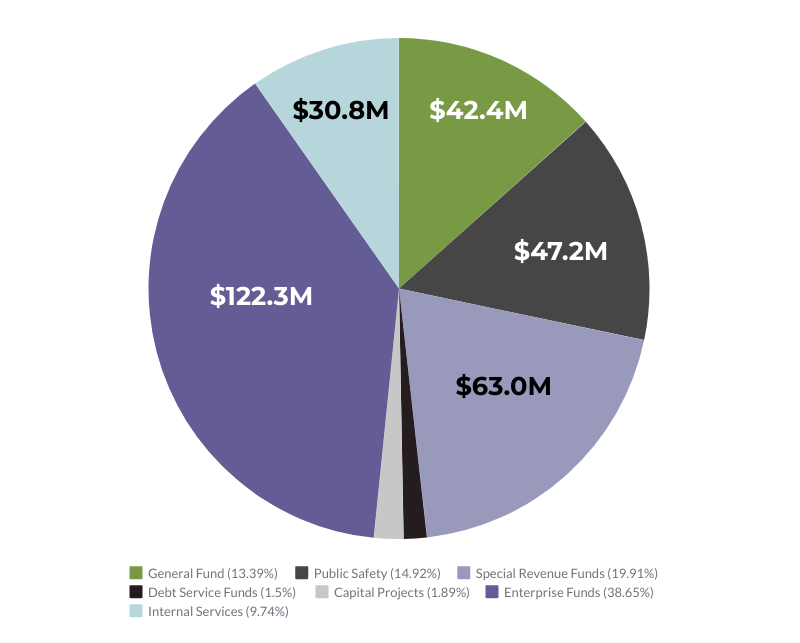